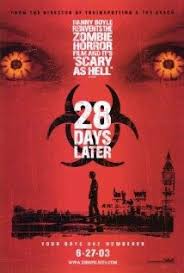 Horror films are a scary (pun intended) subject for me. For perspective: My best friend’s mom took her and I to see Jurassic Park in theatres when we were nine. I had nightmares about about being chased through my kitchen by velociraptors for almost an entire year. IT ALL SEEMED SO REAL AND POSSIBLE!

That was the first – and last – movie that even resembled frighting that I watched for a decade.

Until one Saturday night in 2002 when a friend called me up to see a movie. She bought the tickets before I arrived (I’ll be late for my own funeral), and handed them both to the ticket taker on the way into the theatre (tricky). When we sat down she said the words I will never forget:

“So, we’re actually not seeing Puppies Jumping Over Rainbows like I promised, we’re seeing 28 Days Later. It’ll be good for you.” The theatre dimmed, and the movie started.

I felt my insides go cold at the wide shots of a bleak, deserted and destroyed London. I felt the adrenaline surge when Jim came face-to-face with the first two ‘rage-virus’ victims (absolutely NOT to be confused with zombies, I’ve learned since). I was shocked and appalled – but wonderfully intrigued – by the question mark at end. Old Yeller aside, this was perhaps the first movie I saw that didn’t have a happy ending.

And, as it turned out, I had learned learned the fine art of differentiating between movie science and real science over the last 10 years. I didn’t have a single nightmare!

Admittedly, 28 Days Later is not the most terrifying or obscure horror film out there, which perhaps makes it a questionable choice to endorse. But considering it’s commercial success, I would think I’m hardly the only person it exposed to the post-apocalyptic-zombie-film concept for the first time. This movie opened the door for me to discover a whole genre of film which is easily as much fun as it is scary.

Corina notes a few my other favourites in her Halloween Rental Round-Up, but I highly recommend adding 28 Days Later to your Must-Watch list this Halloween!