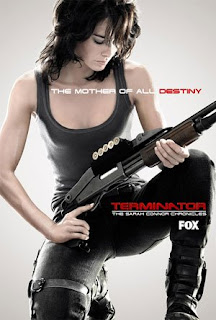 With the release of Terminator: Salvation, I thought I would write about a part of the Terminator mythology that is not very well known. The part in question is the TV show Terminator: The Sarah Connor Chronicles. Set in 2007, the show features Sarah and John Connor living off the grid and on the run. Thoughrought the show’s two seasons, a variety of new Terminators wind up both hunting and befriending the duo. It’s funny to me that I’m writing this piece today, because on Monday May 18th, FOX officially announced that the show was cancelled. You can blame declining ratings for that. Now, I’ve watched every episode of Terminator: The Sarah Connor Chronicles (T:TSCC), and I can say that at times it has been both amazing and completely frustrating.

Some of the highlights of T:TSCC are the performances. Lena Headley is solid as Sarah Connor. Like the show being set after T2, Lena Headley remains faithful to the character and Linda Hamilton’s portrayal. The only major difference that I found to be between the two performances is that Lena’s character is a little more patient and analytical. She considers options, but once she has set her sights on a mission, she is a like a fat kid in a candy store, and will do anything to complete her mission. Also, she’s intimidating, much like Linda Hamilton was. You believe she could kick ass and take names. What I like about the show is that the human characters are human. That sounds silly, but they don’t win every fight they are in. They bleed, they get hurt, and they struggle to survive.

Garret Dillahunt is also very good as the Terminator Cromartie who hunts the Connors. He eventually becomes part of a machine known as John Henry, and is taught about human thought and morality. He especially shines as John Henry, whenever he is learning something new about humanity. Everything seems fresh and new to him, and he plays the character very well.

Brian Austin Green, as Derek Reese, is the biggest stand-out of T: TSCC. I will say that I was apprehensive about him when he first came on the show, because I had Beverly Hills 90210 in my head with him. He shatters the preconceptions about himself, and plays a tough, no-nonsense bad-ass, who is basically a male Sarah Connor. There’s no irony or comedic relief to his character, he plays it very straight. He doesn’t trust many people, and plays by his own rules. He, of all the actors on the show, owns his character of Derek, brother of Kyle Reese.

Stephanie Jacobsen also does well with the supporting character of Jessie, but I wish the writer’s gave her more to do than just wait in a hotel room and meet up with Derek Reese all the time.

The rest of the actors are not awful, not by any stretch, but they don’t stand-out either. Thomas Dekker plays John Connor and I appreciate that he’s not a whiny teenager. Knowing that you’re the leader of humanity might have something to do with that. He tries to be a normal teenager, but struggles with having any other human relationships. His character reverts to being a teenager when he rebels against authority at times [which I found annoying because I know his character is smarter than the outbursts he delivers]. Dekker’s work is solid, but not a stand-out.

The same can be said about Summer Glau as the Terminator Cameron. Cameron is not used to life in 2007 [before Judgment Day], and she has issues fitting in, especially because she’s a Terminator. There is also a weird sexual chemistry between her and John Connor that doesn’t quite work [especially at the end of Season 2]. It is usually played up for laughs, but falls flat, and ends up being creepy more than anything else [I blame the writer’s more than the actors for that].

Where the show fails is in following storylines. Sometimes episodes are stand alone, and have a very loose connection to the overall story. An episode that springs to mind is where Derek and John go to an army recruiting school. In the grand scheme of things, if this episode were taken out, it would not make a huge difference to the storyline. Fans will take issue with this statement, but I stand by this claim. I just wanted a more consistent flow. Episodes are hit and miss, but at the end of Season 1, the series seems to find its rhythm, only to lose it again, finally regaining it by the end of Season 2.

Now that Terminator: The Sarah Connor Chronicles is cancelled, I look back on it with good but not great memories. I do give the series credit for not simply being an action series, and focusing more on the characters and dealing with the fact that if they don’t succeed with their mission, they will not be able to prevent the future as they know it. Some of the characters have breakdowns because of this, and they feel worn out and tired as the series goes on. At the end of the day, the question really is, is Terminator: The Sarah Connor Chronicles essential viewing to follow the Terminator story line? The answer is no.

Season 1 of Terminator: The Sarah Connor Chronicles is currently available on DVD, while Season 2 has yet to be announced.