The changing of the guard for Apple nation is hard to miss. The annual rite of the new iPhone is a harvest feast of social jubilation, hand-wringing, and eye-rolling for those not among the faithful. Lest we be unclear from the outset, I’m a card-carrying “fan-boy”, owning Apple computers and mobile devices, not to mention Apple stock. This year the keening of the iMasses is louder than ever, with the most sweeping update to the iPhone’s operating system since the original  ground-breaking iPhone was introduced in 2007. Is iOS 7 really a big deal, and should you care? Jump with me, through the looking glass…

iOS 7 was released a little over two days ago, and is already experiencing remarkable uptake. Ad network Chitika states that from its release on Wednesday to one day later, 18% of the active iPhone base had already upgraded. Another analytic network, Mixpanel, puts the number even higher, over 40% in its tracking. The reality is likely somewhere in-between, but with over 300 million users on iOS 6, that means somewhere between 54 and well over 100 million users have upgraded in a few days. If you’ve been experiencing slow internet very recently, this might explain why. Compared to other platforms, that kind of adoption is incredible. The very latest version of Android, Jelly Bean 4.3, available since July, has only been installed on 8.5% of Android handsets in the wild. That’s eight weeks.

But forget the numbers. Why are all these people in such a rush to check out the latest evolution from Cupertino? Because it’s a total transformation. Installing iOS 7 on your iPhone or iPad is like getting a brand-new device. The visual and functional changes really are that radical. 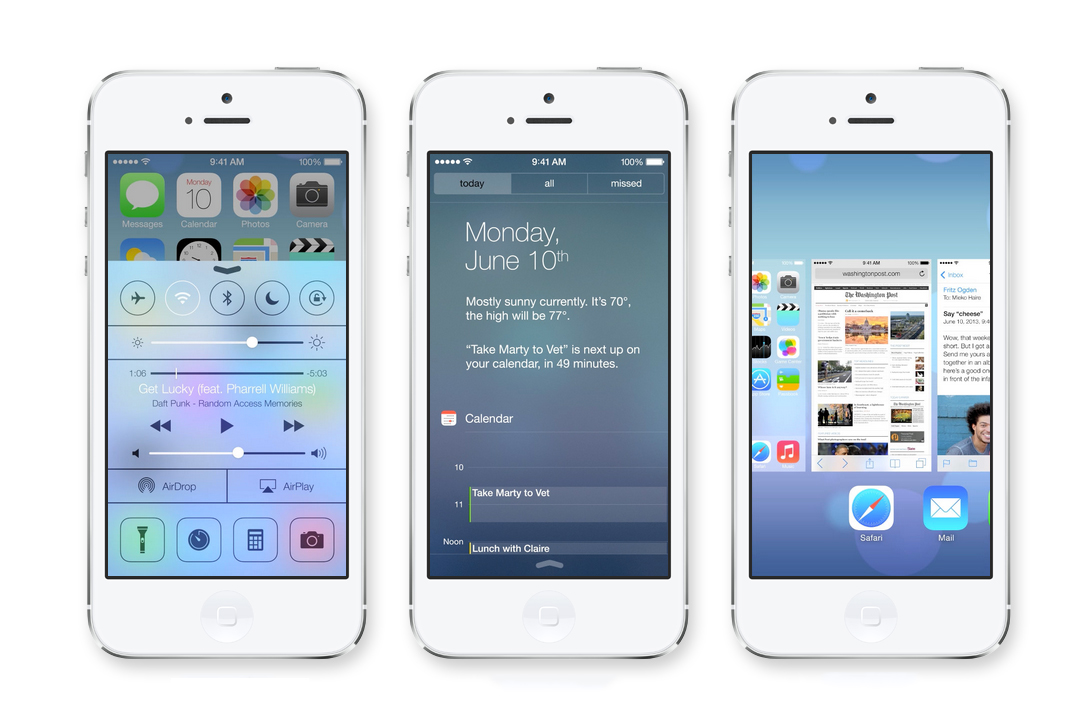 Gone are the beveled edges and drop shadows. In their place translucence is a dominant motif. The OS trades the old tired metaphors for depth, relying on layering to create a clever new three-dimensionality across the screen’s planar surface. The background wallpapers shift under text and icons with a parallax effect, making them appear to be a layer deeper within the device. Control and information panels pull from the bottom or top edges of the screen, sliding into place as opaque panels on top, the visuals of the screen beneath leaking through, like peering through frosted glass. The Corinthian leather dragon of skeuomorphism has been taken out back and summarily shot. No more yellow paper and horrific felt marker fonts in Notes. No more stitching and binding in the Calendar or the Address Book. Apple’s key architects for iOS 7, Jon Ives and Craig Federighi, felt that this far into the game people no longer need those kind of “real world” visual cues to make their strange digital devices seem more comfortable and familiar. Even buttons have disappeared in many places, with words appearing on their own as cues for actions in some places.

There’s a wealth of improvements and new features. The control panel displayed in the first phone image above is long overdue (Android’s had it for awhile), a handy one-spot-stop for many commonly needed features. No longer do you have to go digging into the settings to turn WIFI or Bluetooth on or off. They’re both right there. There’s also controls for Airplane Mode, Do Not Disturb, Orientation Lock and Brightness, as well as an informative mini-music-controller. You also get handy buttons for a flashlight, timer, calculator, and the camera. And there’s buttons for AirDrop and AirPlay (more on those later). You can also make the Control Center (which appears with a swipe from the bottom edge of the screen) unavailable from within apps, a useful setting for gamers.

The Notification Centre has been revamped, giving you a convenient view for today’s calendar, a separate tab for notifications and a third for missed notifications. Multitasking is much improved as well, changing from shifting through app icons in a tray that opens at bottom to a full-screen view that shows you the actual active screens of the open apps as you shuffle through them, with the icons displayed below. Just tap an app to finalize the switch, or flick it up and out of the array to close it.

The unlock screen has undergone an appealing makeover, even if you don’t have a finger-print scanner to do your swiping for you. The new screen for entering a security-code looks great, and the animation that takes you to your home-screen features all the icons flying into place like a very fast version of one of those space-to-earth videos. Folders have been enhanced so there’s no longer a limit to the number of files you can place in one folder. Goodbye Utilities 2 folder! Moving into and out of folders brings more zooming as well.

All of Apple’s apps have been updated, too. On the iPhone, Safari has a cool folder format for displaying open tabs, which you can slide through just like fingering through a filing cabinet. The camera app is snappier, and allows you to take full-format or square pictures with a swipe, great for all the Instagrammers out there. The Photos app automatically groups the pictures you take by date and location to make for easier browsing, and you can zoom out to a Years view to really see time fly by. Sadly, there’s still no tagging. But that’s what third party developers are for, nest-ce pas?

Siri, Apple’s voice-controlled digital assistant, is officially out of beta, with two new voices, one male, one female. Siri’s visuals have morphed into a shifting sine wave as you talk. You can now use Siri to control many features of your device, turning on WIFI or changing the brightness, and to switch or open apps. Web searches, the Wikipedia, movie times and sports scores are all up Siri’s alley. Recognition generally seems quite good, though Siri doesn’t run quite as fast as Google Now. Siri is available on the iPhone 4S and up, and the iPad 3 and up.

AirPlay is present of course. That’s Apple’s tool for streaming music and video content from any Apple device to an Apple TV, something I rely on all the time. They’ve added another sharing feature called AirDrop, which allows users in close proximity to easily share files (photos, videos) amongst each other. AirDrop uses Bluetooth to securely identify nearby Apple users, and then creates a WIFI connection for speedier file transfer. Note that you don’t need to be on WIFI for AirDrop to work, but you do need a recent Apple device, as this feature isn’t rolled out to all the devices that can run iOS 7 (only the iPhone 5 and above, and the iPad 4, currently support AirDrop). And you absolutely do not have to bump anything (unless that’s just for fun). It’s supposed to be very seamless, though I haven’t had a chance to try it due to my older gear.

If you’re in the United States, or know how to pretend you are (e.g. *cough* have a U.S. iTunes account *cough*), you can enjoy the rollout of Apple’s brand new iTunes Radio service. This runs in the Music app (or the latest version of iTunes on a Mac). You can choose from one of Apple’s preset stations (examples: iTunes Top 100: Alternative, If You Like… Drake, Chill Out: Ambient) or enter a band or a song to launch a station based on that and similar music. You can set your own stations for Hits, Variety or Discovery, each progressively more adventurous in its song selection. Unsurprisingly, as each song plays, links to buy it on iTunes appear. The service is free, with occasional ads, or if you subscribe to iTunes Match for $24.99 a year, you can lose the ads. iTunes Radio is designed to challenge Pandora, Spotify, Rdio and the like. It works well, but I’m not sure I’ll be throwing my Rdio subscription under the bus just yet. And as I noted, officially this service is currently U.S.-only.

Overall the new OS is snappy and clean. I’m on older hardware, using an iPhone 4S and an iPad 2. Both are at the bottom of the heap in terms of which Apple devices can run iOS 7. Those and anything more recent are fine. I do find the OS slightly laggy on my iPad 2, but smooth on the phone. I expect any minor hiccups to be ironed out within an update or two. I intend to upgrade to an iPhone 5S as soon as I can steal a truck carrying them, and I don’t doubt that on the latest hardware, iOS 7 will simply scream.

There’s a vocal group out there that decries the flatness of the design and the candy colours. But many of those complaints miss the pervasive sense of play and discovery that makes this iteration of iOS so exciting. I keep finding nifty new things, some big, some small. The metallic ping when I plugged the phone in to charge was oddly delightful. There’s new ringtones, new wallpapers, a nifty bubble-level hidden with a swipe to a second screen in the Compass app. Those apps that haven’t been updated to take advantage of the new OS and adopt its design cues do feel clunky and out-of-place. Developers, get on it! Apps I use that have already made the transition well include Facebook, Hootsuite, Yahoo! Weather, the FitBit app and the song-identifying-app Shazam. Initially the changes were a little jarring and bewildering. It’s much bigger than when Facebook makes one of its howl-inducing shifts. But there’s so much to be gained that the transition is supremely worth it. And personally, I love the new look. (Except for the large bar at bottom for your home apps that used to be a little angled pedestal; for some reason, that annoys me.) Thing is, just like those Facebook changes, you may not like every change, but you move forward. iOS 7 is a fantastic leap in functionality for those playing in Apple’s sandbox. Computing is ever evolving, and the fact that this wondrous discovery machine fits in your hands and can do so very much, well, isn’t that kind of incredible? Welcome to the future. Again.