Today there was a report over at Superhero Hype with the news that Kirsten Dunst will be on board for Spider-Man 4, which is due out in 2011. I have to admit, I made a little dissapointed sigh with that information.

I have no problems with Tobey Maguire coming back as Peter Parker in the film, he’s done a solid job in every film. It wasn’t his fault that Spider-Man 3 was as dissapointing as it was; lay that fault in the laps of the producers, who pressured Sam Raimi to incorporate Venom into the the third flick. But I think Dunst as Mary-Jane Watson has grown tired. The damsel in distress thing is old, and by Spider-Man 3 it sure felt as if the actress was phoning in her part. 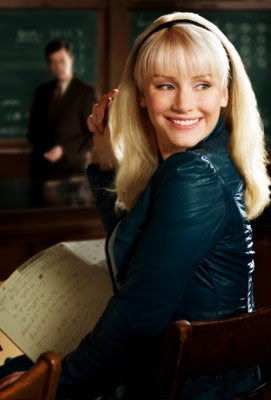 Personally, what I think Spider-Man 4 could use is more Bryce Dallas Howard as Gwen Stacey. The actress was totally underused in 3, but even with so little to work with Howard left a memorable impression as Peter Parker’s lab partner and comic book first love (what is it with Howard being underused; she barely registered in Terminator: Salvation too). Though there some hints of them in Spider-Man 3, it would be great to see some real sparks fly between Howard and Maguire/Peter and Gwen onscreen.

The report, which originated with an interview in the New York Daily Post with Sony producer Todd Black ruled out Morbius The Living Vampire as the fourth films villain, instead stating, “We’re just coming up with who the villain’s going to be now. We’ll be shooting in New York again. Trust me, people will appreciate who we pick, because it’ll be a big part of New York.”

That would make one immediately think Kingpin, who has been a thorn in Spidey’s side since the days of Ditko and Lee, though according to Superhero Hype, Mr. Fisk’s character may still be owned by Fox Studios. There’s also a chance of someone like Tombstone or The Owl could be a New York style villain.

While all of these might be fun and more real world then Spider-Man 3’s Venom and Sandman (once again, underutilized), the character I’ve been waiting for to finally step up is The Lizard. Longtime Spidey fans know that the Lizard has already been seen in human form as Peter Parker’s university professor, Prof. Curt Connors, played by Dylan Baker. An excellent actor, Baker’s been memorable in films like Happiness and on televisions Kings. If given the chance, Baker could leave his mark on the Spider-Man franchise, much like Willem Dafoe and Albert Molina did in the first two films.

But enough of my yakking. Take a look at the poll on the right hand side of Biff Bam Pop! and cast a vote for which villain you want to see onscreen in Spider-Man 4. We’ll find out the results at the end of the week.