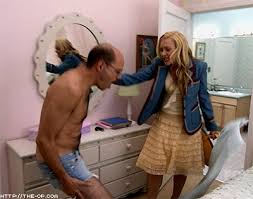 Lindsay Bluth Fünke. Raised as the twin sister of Michael Bluth, mother of Maeby, unloving wife of Tobias Funke. Lindsay is an activist of questionable authenticity, supporting trendy causes, with intentions that are ultimately shallow and superficial. It was revealed in season 3 of Arrested Development that Lindsay is not biologically related to the Bluth family at all, and is 3 years older than she’d previously believed.

Tobias Fünke, a licensed analyst and therapist (or “Analrapist”) lost his license and job as the Chief Resident of Psychiatry at a hospital when he gave CPR to a man who was not actually having a heart attack. At the beginning of the series, Tobias became focused on fulfilling his destiny of becoming an actor. The real highlight of his career – and one of the highlights of the series – is when Tobias joins the Blue Man Group and spends part of the series in blue body paint.

Lindsay and Tobias are the parents of Maeby, though they mostly ignore her – and each other. The couple appears to openly dislike each other. Tobias shows zero attraction toward his wife, who openly dates other people.

In flashbacks we see clips that allude to a happier time for Tobias and Lindsay: hosting lavish charity functions; playing as a family band; having financially stability. But, during the course of the series, we rarely see them interact in any way that isn’t completely awkward and downright hilarious.

It was announced in late 2011 that the Bluths are coming back in 2013 thanks to a deal with Netflix. The entire original cast has signed on for the reunion. It will be really interesting to see how the pick up 7 years after the abrupt end of the 3rd season in 2006.

Enjoy some of the best laughs from Tobias Fünke: