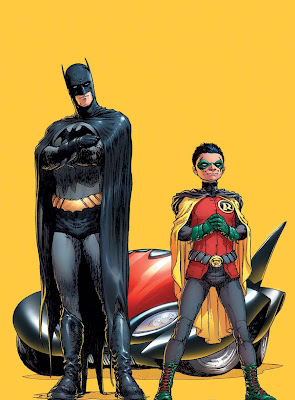 The Batman is dead. Long live Batman and Robin.

This week marks the release of the new ongoing series, Batman and Robin, from DC Comics. Although there are several ongoing monthly titles featuring the Caped Crusader, this premier issue is the first to appear after the (likely temporary) conclusion of DC’s mainstay titles Detective Comics and Batman, as well as both fan favourites Robin and Nightwing.

Within the current continuity, Bruce Wayne has been dead for several months (see Batman R.I.P.), and his former colleagues, apprentices, and family-members have been waging the war on crime in Gotham City in the absence of the Dark Knight. In the now-completed three-part series, The Battle for the Cowl, characters like Dick Grayson (the original Robin, now crime-fighting under the name Nightwing), Jason Todd (the Robin who died at the hands of The Joker but who has recently returned), and Tim Drake (the current Robin) competed to be the heir to the mantle of the bat. This new Batman and Robin series features the debut of a modern tandem that has taken control of crime fighting in Gotham City. Although it is reasonable to predict that Bruce Wayne will eventually be written back into the DC Universe continuity at some point, this new duo is now the official Batman and Robin and their title marks the beginning of the larger Batman Reborn storyline.

It is amazing what a difference a great artist can make. Tony Daniel (Batman R.I.P., The Battle for the Cowl) is, without a doubt, talented. But, similar to other successful material written by Grant Morrison, Frank Quitely (All-Star Superman, New X-Men, JLA Earth 2) is the artist for the job. Quitely brings a cinematic perspective to each panel, using wide-angle shots that demonstrate the grand scope, detailed close-ups, and a fluid pace to each and every character movement. The very first panel of the book combines an explosion and the sound effect in a way I have never seen before, and the technique immediately caught my attention. Quitely’s use of body language is superior to most of his peers, and his approach of scanning his pencils and inking digitally has kept his artwork looking fresh and tightly controlled. He is able to use a detailed cross-section of the Wayne Tower and Batcave to move along the narrative in an original way. The redesign of Robin’s costume is practical and simple (reminds me of the one I did in ’03), while the new Batman is slightly tweaked to match the style of the series. For the first time, the artist drawing another man in the Bat-suit is able to avoid having the figure pose and move like Bruce Wayne. It is visible that Morrison and Quitely’s Batman is not Wayne, and that is a sign of good communication between creators and a skillful artist. This new Batman is leaner, younger, and has a streamlined utility belt. Quietly even pulls out a ‘sixties special’, and uses yellow for the background on the cover. Neal Adams, and other artists of that era, used to favour the yellow background, stating that it made the images pop and the sales were actually higher on issues containing yellow covers. Although it does not work on screen, the use of yellow in print is very effective from a graphic point of view.

One of the biggest challenges that the book faces is convincing fickle readers that the new Robin is not annoying enough to kill, but complex and exciting enough that we need to see where he goes next as a character. The new villain has one of the most terrifying introductions I have read in years, and the new Batmobile is the natural progression in the modern superhero world in which Batman exists.

Audiences are being set up for a less grim, less soul-searching series, and will be given an action-packed, high-tech, beautifully crafted story that has less to do with the inner workings of the man behind the mask and more to do with the thrill-ride of being part of the most famous partnership in all modern hero fiction. Batman and Robin will make it cool to have fun being The Dynamic Duo.