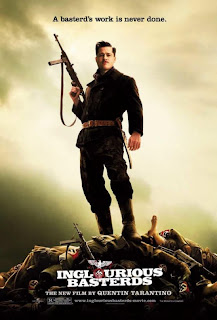 Pitt and Tarantino ruled the box office this weekend, as Inglourious Basterds hit #1. I did not do to well in predicting where films would end up, but I was not too far off in any of my predictions. Let’s go through the rundown!

Inglourious Basterds opened at #1 with $37.6 million (I predicted $33 million, so I was off $4.6 million), giving it a fantastic per theatre average of $11,880. Despite the 2.5 hour running time, it still was able to draw people into the theatre, and with excellent reviews and good word-of-mouth, it should continue to play well into September. The film gave Tarantino the highest opening weekend of his career, and finally gave the Weinstein Company a #1 hit for the first time since 2006’s Scary Movie 4. It is also the third highest grossing movie in the history of the company after only one weekend. Everyone involved should be very happy.

In 2nd place is District 9, which was down only 49.4% for a gross of $18.9 million (I predicted a gross of $22.3 million, so I was off $3.4 million). Its per theatre average is still very strong, as it stands at $6,197, and the film has grossed $73.4 million in two weeks. This second weekend shows that word of mouth is strong, and like Inglourious Basterds, this film should play well into September.

Yo Joe! In 3rd place is G.I. Joe: The Rise of Cobra with $12.5 million (I predicted $8.9 million which was off $3.6 million, and that the film would be the #5 movie in the land). The film was off 44% from last weekend, and it had a per theatre average of $3,162 which was the lowest in the top 5, and its total gross now stands at $120.5 million. The per theatre average shows that audiences are not truly embracing the film, as it should be higher after 3 weeks if it was a true hit (It’s amazing I just wrote that sentence yet the film has made $120.5 million).

In 4th place is The Time Traveler’s Wife with a gross of $10 million (I predicted $9.6 million, so I was only off $0.4 million). Down 46.2% from last weekend, the film has a per theatre average of $3,355. Again, the fact that the film has a per theatre average below $5,000 after its second weekend is not a good sign, and The Time Traveler’s Wife will be out of the Top 5 next weekend. Its total gross stands at $37.4 million.

In 5th place is Julie & Julia with a gross of $9 million, which was only off 25.3% from last weekend. I did not predict the film to end up in the top 5, but the gross this weekend shows that the film has staying power. Its per theatre average this weekend was $3,654 (which was the 3rd best in the Top 5), and Julie & Julia has grossed $59.2 million in three weeks. I criticized G.I. Joe: The Rise of Cobra and The Time Traveler’s Wife for having low per theatre averages, the fact that Julie & Julia was only off 25.3% in its third weekend is excellent, and it should continue to have a slow decline and play into September.

I predicted that Shorts would open #3 with $10 million, but unfortunately it did not come close to that. It was the #6 film, and grossed $6.6 million. It was released in 3,105 theatres, and had a dismal per theatre average of $2,126. It will find lives on DVD shelves soon.

Joining Shorts on DVD in the new future is Post-Grad. It opened at #10 with a gross of $2.8 million and a per theatre average $1,429. This film was never marketed strongly, so I don’t think it was ever given a chance from the very start.

Another new release that will be on DVD shelves very quickly is X-Games 3-D: The Movie. It opened outside the top 10 with a gross of $800,000. It got a limited release, and I’m sure most people did not know it was even in theatres.

So to recap, here were my predictions:

And here are the actual numbers:

Next weekend bring us a horror battle with Halloween II and The Final Destination opening as well as Taking Woodstock. Check back on Friday to see what my predictions are.