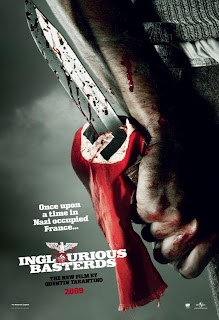 The summer season is almost over, but one of the most anticipated films of the year is released this weekend, so let’s get right to it.

Quentin Tarantino and Brad Pitt team up to bring us Inglourious Basterds. The film is about a bunch of Jewish soldiers who are on the hunt for Nazi’s and get involved in a plot to kill Hitler and end the Third Reich. It got good but not great notices at Cannes, but the performance to watch in this film is Christophe Waltz. He is already receiving tons of Oscar Buzz, which never hurts a film. Inglourious Basterds is around 2h30m in length, which will eat into the number of times the film will be screened in a day. The film is receiving rave reviews [I always find it funny how the opinion of a film can change after the Cannes film festival], and currently stands at 88% on Rotten Tomatoes. Predicting Tarantino’s box office is never easy. Here is a list of his films [with the exception of Four Rooms, because that film got a tiny release] and how they did on opening weekend, as well as their total gross:

The film is being released by the Weinstein Company, and they really need a hit. This one should provide it. Opening on 3,165 theatres, I’m predicting Inglourious Basterds will open with $33 million, and be the largest opening in Tarantino’s career.

(Editor’s Note: You can check out our review for Inglourious Basterds here)

Tarantino’s Grindhouse buddy Robert Rodriguez is also releasing a film this weekend, but Rodriguez returns to the family picture genre. His latest is Shorts, and it is about a magical rainbow coloured rock that has special powers. The kids have it, but then they lose it to the adults and have to get it back. I’ll be honest, the premise and trailers do not interest me at all, but then again, I’m not Shorts target demographic. Critics are not giving the film high praise either, with Rotten Tomatoes listing Shorts at 36%. Again, just as a basis of comparison, here are the opening weekends and total grosses of Robert Rodriguez’s family films:

There’s no way that Shorts will reach the heights of these films, and I think it will have the lowest opening weekend of Rodriguez’s family films. Opening in 3,105 theatres, Shorts should gross $10 million.

Two other films open this weekend, but will not impact the top 5 of the box-office. Alexis Bledel stars in Post-Grad. Opening in just 1,958 theatres, it does not have a hope of doing decent business at the box office, and will find a life on DVD shelves shortly. The other film is X-Games 3-D: The Movie. That film is being released in 1,399 theatres, and will have the same issues as Post-Grad.

Among holdovers, I think District 9 will hold up the best, because it has such great word-of-mouth going for it. Expect a 40% drop for a gross of $22.3 million.

G.I. Joe: The Rise of Cobra and The Time Traveler’s Wife have been battling for the #2 and #3 spots all week long, with G.I. Joe winning the battle on Monday, Tuesday, and Wednesday, but I expect that to change on the weekend. Look for G.I. Joe: The Rise of Cobra to drop 60% for a gross of $8.9 million, and look for The Time Traveler’s Wife to fall 48% for a gross of $9.6 million.

So to recap, here are my predictions:

Check back on Sunday to see how I did!