Is every event comic really an event? The ones that are supposed to shake things up and tear things apart? How close do they really come to making an impact?

It’s safe to say that DC’s Final Crisis makes an impact. Written by superstar scribe Grant Morrison and illustrated (most of the time) by J.G. Jones, Final Crisis was a 7 issue mini-series that saw Jack Kirby’s diabolical New God creation Darkseid bring Apokolips to Earth (or is it Earth Zero – more on that in a bit). Throughout the series beloved heroes are corrupted and turned to the dark side (here called Anti-Life), and at least two legendary characters meet their demise. Whether or not you’re a DC fan, it all sounds compelling and exciting. And in some ways it is.

Ending its run earlier this year, Final Crisis was recently compiled into an attractive hardcover, featuring a cover that is pretty much as big a spoiler as you can get these days. 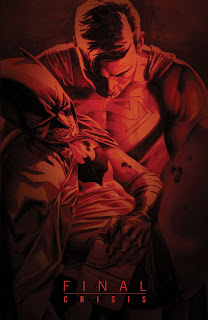 Yes, Final Crisis features the apparent death of the Batman, a victim of Darkseid’s “Omega Sanction”. Don’t know what that is? That’s alright, I had to look it up online at Wikipedia. The Omega Sanction “traps the organism in a series of alternate realities, each worse than the previous one. Also, the ability has been shown to transport those struck by it through time and space.” It’s all very sci-fi and complex, but it also makes it clear that Bruce Wayne will one day be able to make it back to the world he belongs in. While I wish I could say the Caped Crusader meets his end in spectacular fashion, sadly, the moments leading up to Batman’s death are anti-climactic.

After missing from the majority of Final Crisis (the last we saw of him was in the second issue after he’s been captured by Darkseid’s minions), Batman makes a triumphant return out of nowhere in Issue 6 to make his stand. The whole moment just sort of happens, which is one of the biggest problems I had reading Final Crisis. Things just happen, and you never know exactly why. Or where.

For the novice reader, DC stories don’t take place in just one universe – there are something like 52 differing universes out there; sometimes they interact, sometimes they don’t. I don’t know much about the complex nature of the multiverse and I try not to think about it too much because it gives me a headache. Grant Morrison, on the other hand, knows a lot about the DC multiverse, and he certainly enjoys showing off his mastery of it in Final Crisis. It doesn’t seem to matter if I get what he’s going for or if I know who some obscure character is. Morrison knows what he’s after, and the reader is just along for the ride. For a good head spin, check out this interview with Morrison that Newsarama conducted back in January.

Much like Final Crisis, I’ve gotten a bit off track. I apologize. Now don’t think that I hated the series, because I certainly did not. I thought the artwork by J.G. Jones was outstanding, especially the opening three panels which made me say “wow” outloud. Jones handles the majority of the work in the book, though he does have some able assistance from Doug Mahnke towards the tail of the run. There are also some brutal scenes that demonstrated that the creators weren’t messing around when it came to casualties.

The Final Crisis compilation also includes two tie-ins that Morrison considers essential parts of the larger story. Superman: Beyond is, in this reader’s opinion, weighted down by techno-babbble and confusion. Better is Final Crisis: Submit, which features Justice Leaguer Black Lightning as he tries to help a gang of survivors evade the hordes of Darkseid. Submit is a mixture of dark and light, hopelessness and optimism (along with the downfall of another core character).

As a Marvel Zombie born and bred, I tend to prefer the Marvel Universe method of storytelling (less sc-fi, more real world), but that doesn’t mean I don’t enjoy the work of the distinguished competition. I thought other DC event series like Identity Crisis, Infinite Crisis, and 52 were all stellar achievements. That said, I don’t think Final Crisis is as solid as any of those series. Or as unique. About halfway through reading Final Crisis the story started feeling a little familiar to me. Hell on earth, a somewhat demonic overlord. It was like the Age of Apocalypse all over again. Except frequently incomprehensible. And with need of footnotes. And endnotes.

While you’ve got to admire Grant Morrison’s gusto and ambition with Final Crisis, I think you’ve got to shake your head a bit as well. Seemingly given carte blanche to do as he will, Morrison created a story that is so reliant on the reader knowing and understanding everything that’s come before in the DC Multiverse, that all you’re ultimately left with is a gorgeously crafted piece of impenetrable fiction.

Until the next crisis…

One Reply to “Crisis? What Crisis? – Andy B on the Final Crisis Hardcover Compilation”